I have not been keeping to my daily food blogging as I had hoped. I don’t feel like a failure but I am disappointed that it has been cut so early. No excuses and the reason for not blogging as regularly as planned is because, well, life and…my camera broke on me. I have tried to fix it and called Samsung support and other Samsung authorised service centres and there are none in Scotland, never mind Edinburgh. I am disappointed that there is limited after care for other Samsung products other than mobile phones in the UK (after trying to reset the camera, Samsung told me to call a number down south in England to repair my camera). Also, I haven’t used the camera to death and still in mint condition and before it decided to give up, it wasn’t focussing (hence, the very rubbish photos in the previous blog) and then it keeps saying “card locked”. Very frustrating but resigned to the fact I will need to buy a new camera and it will be with a brand that has good after-care service. I have been researching for so long now but there is so much choice for cameras out there!

Also, since 2nd January, I have been working 7 days a week, with the odd exception, I have either been at my normal 9 to 5 job and rest of the time I have been helping friends and family, who have their own businesses and have been struggling with staff shortage.

Yes, we all need rest and mustn’t burn ourselves out but compared to a couple of years ago, I feel I can manage this and I know this is not a permanent arrangement. I have still been getting in 3 runs a week and able to catch up with friends here and there. Plus, it was helpful to make January pass quickly being such a long month.

We are now into February and I want to share with you a few of the things I have been eating since I last blogged. As my camera is no longer working, I have had to use my phone camera for all the photos in this post.

I have dinner once a week with my mum and we generally have it at my home. She has the Monday off and whilst I work Mondays, my mum will come round and have dinner ready for me. When my mum cooks, this is usually home cooked Chinese food (although, this week, we had homemade sweet and sour pork, which I, of course, forgot to take a photo). Here are a some of the meals we ate together: 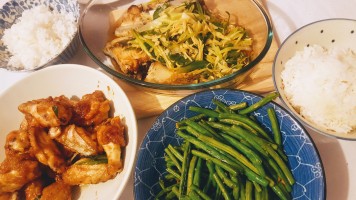 There’s a theme with Chinese home-style eating. We have several dishes and share with bowls of rice. These dishes are generally a meat or poultry dish, a fish dish and a vegetable dish. On one of the weeks, my mum and I ate out after doing home organising after my mum moved home in January. It was late and we had been at it all day so we went to eat at Taste Good and it was the first time we had eaten in. They have a take-away and the restaurant is downstairs, which offers western Chinese food as well as traditional Chinese food. We opted for 2 roast meats (char sui and crispy pork belly), stuffed three treasures (minced prawn stuffed in tofu, aubergines and peppers) and stir fried kai lan in ginger. All three dishes did not disappoint. The char sui was tender, sweet and perfectly barbecued. The crispy pork belly was not overly fatty and the skin was light and crispy. The stuffed three treasures were perfectly cooked. The tofu and the two vegetables were cooked through and did not fall apart or was too mushy. It was served with black bean sauce, which was not oily or too salty. This dish impressed us so much that my mum ordered a portion to take-away so that I can have it for dinner the next two following days! We had originally ordered the ong choi (my favourite) but they did not have any and the kai lan dissipated my disappointment as soon as the dish arrived. The staff was friendly and attentive and they offered the right amount of attention. We will definitely be going back there or order from this menu again for take-away. Their roast meats are the best I have had in Edinburgh. I cannot speak for the roast duck but I will give that a try next time.

As well as eating with my mum, the OH and I ate together as much as we could. We both have been working like crazy and not had time to do a food shop. Breakfast and brunch are my favourite meals. We decided one morning to try Toby Carvery breakfast mainly because it is all-you-can-eat and at the price of £4.29, it seemed very attractive. 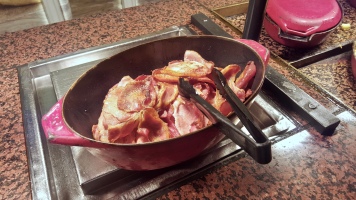 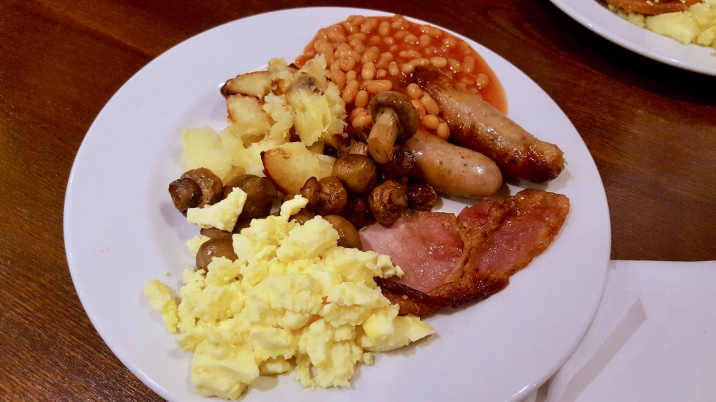 Much like the carvery, the food is presented under the food warmers and you just go up and help yourself as many times as you like. They have the usual cooked Scottish breakfast affair or lorne (square) sausages, link sausages, scrambled eggs, fried eggs, bacon, potato and cheese hash, grilled mushrooms, potato scones and baked beans. There is also a toaster (like the ones you get in hotels) for unlimited toast as well. I added the unlimited filter coffee on top of my breakfast. At that price, I was not sure what to expect. On arrival, it did not start off well as the staff member who was present on us entry did not greet us and looked at us without saying a word. He came across like he did not want to speak to us. Perhaps he was having a rubbish day at work but I think the least we deserve as customers is a ‘hello’. Quality-wise, the products tasted low-cost and I would expect that from the price point. The scrambled eggs tasted like they were from a carton, rather than made with fresh eggs. The fried eggs needed to cook a bit longer so that the whites were not translucent. Everything else was just fine, again, for the price it was as it is expected. I’m glad to have tried the breakfast at Toby but with so many establishments serving breakfast in Edinburgh, I will not be hurrying back any time.

Speaking of breakfasts, when I was unable to take photos because of work, I managed to make my own breakfast at home at the weekends. I love eggs and I will usually have eggs at the weekends for brekky.

I usually scramble my eggs so that they are light and creamy but lately, I’ve been having omelette with whatever is in my fridge (spinach, heirloom tomatoes, ham). On the day I ran 10k, I was so hungry that I had fried halloumi and avocado toast. After that, I well and truly full to the brim.

After running after work, it is quite late (late for me anyway as I am almost a granny) so there were occasions where the OH and ordered in. We had Five Guys one night as there is one very close to out home. I usually order the small cheeseburger but on this occasion I ordered the double patty cheeseburger all the way, of course. We shared the cajun-spiced fries and the OH had a bacon cheeseburger AND a hotdog. He loves the hotdogs from Five Guys. We hadn’t ordered Domino’s or pizza in a while and we Domino’s one Tuesday evening, again after a run. I always like to order half and half, where one side is veggie and the other side has meat. I know some out there will think I am a heathen for having pineapple near my pizza. I was introduced to pepperoni and pineapple pizza by my friend from Denmark. She used to work in a pizzeria and we share a love of food so she told me to trust her and she was not wrong. The combination works! The saltiness of the pepperoni is counter-balanced with the sweetness of the pineapple. Don’t knock it ’til you’ve tried it.

In February, it has already started how January did with work and running. This should ease up toward the end of the month but I will attempt to blog weekly what I ate, buy a new camera and I also have some exciting news to blog about too!

3 thoughts on “What I ate the rest of January”